Radio 4 Factoid of the Day

The long-running Radio 4 series A History of Private Life by Professor Amanda Vickery finishes this week. Today, describing the rigours of a passage to India, she comments

No wonder the affluent tried to book cabins on the shadier side of the steamer. “Port out starboard home” — “posh”, of course. 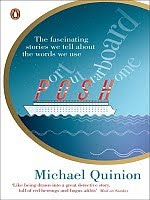 Of course! “How interesting,” I could just picture thousands of well-meaning listeners up and down Radio4-land saying to themselves, “I must tell all my friends about that” — and so the misinformation virus propagates itself. But how strange that no-one has ever managed to produce one of the fabled P&O steamship tickets stamped “POSH”. This corny backronym serves as the title of the excellent Michael Quinion’s debunking of language myths, Port Out Starboard Home (Penguin Books 2004, ISBN 0140515348). By the way I also warmly recommend his weekly “e-magazine” and website World Wide Words.

These tall tales about language are incredibly persistent. You hear them retailed on Radio 4 all the time, and often by people who frankly should know better, in this case an academic historian, who you might think would try to avoid making foolish assertions without a shred of evidence. It didn’t take the Apollo missions to convince the general population that the Earth was not flat and that there was no Man in the Moon, but when it comes to language, for some strange reason, even the most intelligent and erudite people simply switch off their brains.
at 23:50