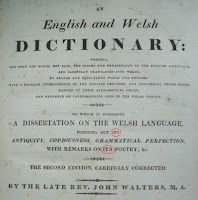 Apparently I write like James Joyce. Impressive, eh? Or Daniel Defoe. Still pretty distinguished. Or H P Lovecraft. Or Ray Bradbury. Or (spare us) Dan Brown, even if my own style is slightly less… how can I put it… lucrative.

Basically the more samples you feed the gadget the less it can decide. One is such a profound literary enigma.
at 10:53 No comments: 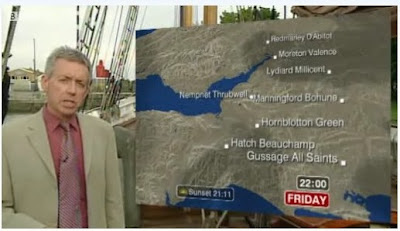 The places identified on the maps shown by TV weather forecasters can seem randomly chosen, but Richard Angwin of BBC Points West has a nice line in whimsical themes. Here he joins the ghosts of John Betjeman, Paul Jennings and Flanders and Swann in the fine tradition of revelling in quaint English placenames. Redmarley D’Abitot, Moreton Valence, Lydiard Millicent, Nempnett Thrubwell, Manningford Bohune, Hornblotton Green, Hatch Beauchamp, Gussage All Saints: quality toponymy. He did well to cram them onto the map.
at 23:07 No comments:

Writing a book is an undertaking far more horrific than I’d ever imagined. Not only must the writer come up with several tens of thousands of words, not all of them the same, but he or she must arrange them in an order that makes some kind of sense to the first-time reader.

—Armando Iannucci, “On writing a book”, Facts and Fancies
at 15:34 No comments:

Radio 4 is, for many of us deskbound homeworkers, not so much something you listen to as something you hear: a human voice in the background to stave off cabin fever. The guest on today’s (repeated) Desert Island Discs is Sir Stuart Rose, executive chairman of Marks and Spencer and, so he claims, the only white elder of the Wagogo “tribe” of central Tanzania. He’s a little hazy on the details of that country’s birth, however. “My family and I left Africa in ’60, ’61 when Tanganyika, as it was, became independent Tanzania.”

Not quite. As those who love to flatter TV adverts with parody might say (cue soothing music and sumptuous visuals), “This is not just fact...” — or rather, this is just not fact. For the record, Tanganyika became independent in 1961 as Tanganyika. The island off its eastern seaboard, Zanzibar, gained independence two years later, and only in April 1964 did the two form a brand-new nation, the United Republic of Tanganyika and Zanzibar, shortly afterwards renamed the United Republic of Tanzania.

So he plays a recording of some Wagogo traditional music and, without a hint of embarrassment or a flicker of irony, follows it up with a piece of hokum performed by a Lithuanian-born American Jew with burnt cork on his face. Yes, pop-pickers, it’s Al Jolson with “Mammy”. Rose remembers his parents “literally falling about laughing” when he would sing them this song as a young child in 1950s Africa.

What’s the one record he’ll cherish above all others? It’s a pop-style rendition by “crossover singer” Phillippa Giordana of “Casta Diva” from Bellini’s Norma. Or as Kirsty Young calls it, “Costa Diva”. Plenty of them hanging around the high-street coffee shops and the Spanish seaside resorts, I expect.

Breakfast was not the best time to hear Kirsty Young flirt and slobber nauseatingly over this tedious plutocrat — “you’re very dashing, and you’re very urbane ... you’d be a bloody good catch for someone, Stuart!” Yes, the underwear rail at Marky’s will never be the same again for Kirsty.