Too late, at least too late for Christmas, the world is waking up the true value of the woefully underpriced Whatever Happened to Tanganyika?. Doubtless by some clerical error, the thing was published at only £10! Not surprising then that it has sold

Labels: Whatever Happened to Tanganyika?

It hardly needs to be said that 2009 has been a woeful year in publishing. Some light relief, and some good news for one small-time non-fiction author, might be found buried in the gossip columns. Or rather, spread across the front pages of the mainstream serious press, as is the way with celebrity trivia nowadays. When Tiger Woods had his famous contretemps with various inconsiderately-located items of street furniture, he had a copy of a 1999 book called Get a Grip on Physics lying around in the car, clearly visible in the police photo of the crash. Cue much heavy-handed hilarity among Amazon reviewers and ludicrous prices for second-hand copies (£151.48, seriously?). The book’s author, John Gribbin, “just wish[es] it was … still in print”. (It might be flippant to suggest that an inadequate knowledge of physics was not first among a certain golfer’s problems at the moment and that he should perhaps concentrate on the first three words of the title.)

And what of Whatever Happened to Tanganyika?, that soaraway phenomenon of the popular history/humour sections, or travel in the case of shops where they don’t waste too much time looking at the stock before filling the shelves? Do I have the police of 50 states on retainer, armed with copies of my distinctive crimson volume to slip into shot at any high-profile celeb RTAs? Well no. A spike like the Eiffel Tower would do it little enough good at the moment, since both American and British Amazon seem to have run out of stock — just in time for Christmas, hoorah. No-one seems to know why or what can be done about it. Publishers have heard nothing from their Amazon sales manager: there “should be” stock…

By a charmingly nostalgic coincidence this is exactly what happened when this would-be Christmas bestseller first came out. Interview on Today prog, 6.6 million listeners: good. Amazon ranking goes through the roof: good, surely? Twenty minutes later, Amazon sells out with no hope of restocking before Christmas and spike does its impression of Eddie the Eagle with a bus to catch. Hey ho ho ho.

PS: You can still get a paperback copy. Paperbacks are nice too.
at 23:25 2 comments:

Labels: publishing, Whatever Happened to Tanganyika? 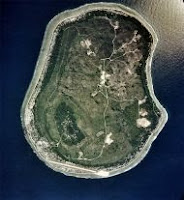 (On the more mysterious question of how Nauru could remind even the most desperate and deadline-addled journalist of “a small dinner plate dropped into the gleaming South Pacific”, I have nothing to offer.)
at 13:39 No comments:

Seagull, seagull, how do you float?
Upon the water without a boat?
He thought to himself and then he frowned
Turned on his side and slowly drowned.
– Leslie Noaks, 1914–2000

Inscription on a park bench, according to The Oldie.
at 12:25 No comments: