The definition of erudition

Dictionaries and other reference books are a well-worn not to say clichéd symbol of knowledge, so it is no great surprise that whoever designed the “Listen Again” web graphic for Radio 4’s quiz programme Brain of Britain chose a photo of a shelf of chunky non-fiction tomes (below). 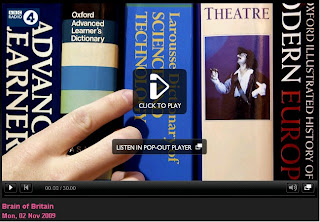 What is slightly odd is that the image should show a shelf of five books no less than 40% of which is made up of the Oxford Advanced Learner’s Dictionary. This is, as the title implies, a publication aimed at learners of English as a foreign language. Yes, two copies of the same title, one a slightly more modern edition than the other — and it’s the old edition that the listener’s hand is reaching for. Of the five works available, that one must surely be the least useful in, well, almost any context really.
at 02:44