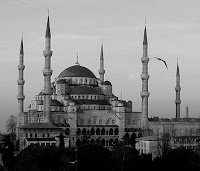 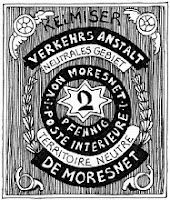 The latest edition (5 January) of the excellent Radio 4 programme Word of Mouth is about artificial languages, especially Esperanto. There is mention of Amikeyo, supposedly the world’s only official Esperanto-speaking state, which existed in the vicinity of a little village on the borders of Belgium, Prussia and the Netherlands. In the programme they refer to it as Kelmis, which is its name in Limburgish, the local form of Dutch. As Neutral Moresnet, the crazy sliver of a jointly-administered microstate that existed between 1816 and 1919, it gets the full nine yards in the compulsive geographical page-turner that is Whatever Happened to Tanganyika? — over a thousand words if I remember rightly. (I must admit it amused me that the tiniest territories, in this case about a square mile, should get the longest writeups.)

The equally excellent Strange Maps blog has a page on the subject, including not only a very nice map of the place but a historical timeline and some discussion of whether it was (and whether there has ever truly been such a thing as) a quadripoint, where the borders of four sovereign states meet precisely.