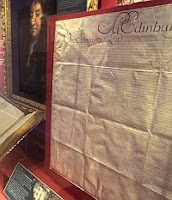 The other day I happened to be looking at the founding charter of the Bank of Scotland, which is an act of the (old) Scottish Parliament dated 17 July 1695. It “allow’s a Joint stock” of so many thousands of pounds, blah blah blah, “and farder Statut’s and ordain’s...” and so on and so forth. Poor Lynne Truss, I wonder if she has spent the last six years having her nose rubbed in things like this. Or perhaps she still fondly imagines the reviled “greengrocer’s” apostrophe was invented in the late twentieth century. Luckily the document was in a glass case, so the Punctuation Taliban couldn’t get to it with their Tipp-Ex.
at 02:00