Last Thursday was National Punctuation Day in America. I apologise for not telling you about this at the time, so that you could try to join in the fun, albeit at a distance, but I was, ironically, too busy copy-editing at the time.

So what happens on National Punctuation Day? The website suggests you go for a stroll round town, “paying close attention to store signs with incorrectly punctuated words. Stop in those stores to correct the owners. If the owners are not there, leave notes. Visit a bookstore and purchase a copy of [God help us all] Strunk & White’s The Elements of Style.” Leaving notes is perhaps less confrontational than the direct action espoused by radicalised British punctuationistas of the Trussite tendency, who often pack heat — heavy-duty felt-tipped marker pens, that kind of thing — but the mention of the egregious Strunk and White nails the colours to the mast. 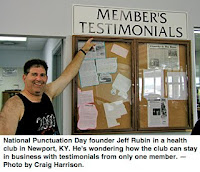 Yet again, any debate over punctuation is the province of linguistically uninformed zealots, which is a pity. The sheer power of their anger is quite startling, as a glance at the comments on the Daily Mail website will confirm, and, previously denied an outlet in mainstream publishing, this anger has made a rich woman of La Truss. I personally don’t begrudge her that, it’s a pleasure to see such an unlikely publishing prospect (as everyone thought) become a genuine word-of-mouth hit. Even if it is based on a fundamental misunderstanding of language and has become the bible of tedious fanatics.

The tone of the National Punctuation Day website seems calm and good-humoured, however. There’s a photograph of Mr NPD pointing gleefully at an apostrophe “mistake” (above). He presumably thinks it should be “members’ testimonials”. I’d say that’s debatable. And frankly not worth getting het up about.

Well, each to his own petty obsession. The thing that shocks me about that notice is the fact that they couldn’t use a proper apostrophe instead of that horrible vertical line thing. That just looks nasty.

No-one can deny that effective use of punctuation is a good thing, though whether it helps to go round leaving notes for small traders critiquing their shop-fronts is another matter. But, now that many of us write with keyboards more often than pens, are we entering an era when people don’t even know what punctuation marks actually look like?
at 01:11